“The “Color Code of Ethics” became a “political football” and snowballed into a veritable glacier when a wonderful Great Dane became a top winner: “CH Honey Hollow Stormi Rudio”.

Stormi was shown at not more than 40 shows, winning his championship quickly, by going Best of Breed from the classes, on to group firsts (then the full working group) and BIS’s. Hardly traveling more than a hundred miles or two to shows, he won EIGHT BIS. Compared to the border-to-border, coast-to-coast campaigns in the breed, this was incredible. In 1959 he won the prestigious group at Westminster – a huge breed win under James Case and the group under John Cross who was an “emergency” replacement to the published judge. The crowd went wild over this fairly “unknown” dog – and there were many famous big winners of the day in that group and some of the top big-name handlers in that ring. And it had been years since a Great Dane not only won the group or even placed at Westminster.

Not only was Stormi Rudio a fantastic showman, but he moved magnificently and probably was as near-perfect as any Great Dane that ever lived (up to that time.)

Instead of the Great Dane people of that time rallying to this superb dog – what he could contribute to the breed – and the tremendous respect that those in other breeds felt toward him in his short but dazzling career, many of the Daneites unsheathed their hatchets and hacked him and his Breeder/Handler to pieces.

CH Honey Hollow Stormi Rudio had a fawn father, CH Shalott’s Sir Allistair, and his mother was black, Honey Hollow Ruda Kazoota. This was the start of the ridiculous controversy over “mixed color breeding” that suddenly blazed into “open warfare” and to this day is still a “bone of contention” amongst self-nominated purists.

note on the photo above – Ch. Shalott Sir Alistair’s dam, Ch. Honey Hollow Ebony Maid was brindle and not black

Before the advent of Stormi Rudio, there had not been a “peep” about this unorthodox mix of black and fawn. This had not been a planned breeding, but occurred through the carelessness of the kennel man – the mating had been a “love match” between Allistair and Ruda Kazoota, and Stormi was the only fawn male in a huge litter of predominantly blacks – and mighty good ones. Stormi had been sold as a pet, and the breeder did not see him for another 2 years. When she did, she realized immediately that he was about the best Great Dane she’d ever seen and persuaded his owner to allow her to handle him.

Thus, the “code of ethics” became a “political football”; it would never have snowballed into a veritable glacier had Stormi not been such an enormous winning showdog. After continual harassment, the breeder resigned from the GDCA and from then on, bred the best blacks possible and continued to breed also reputable fawns.

Ruda Kazoota’s brother became the famous CH Honey Hollow Rameses, owned by J. Council Parker, who continued to breed many outstanding blacks – also fawns and brindles despite criticism from the good ole GDCA. Brave man! And the former generation of Great Dane fanciers know that “Counce” Parker was one of the finest judges. 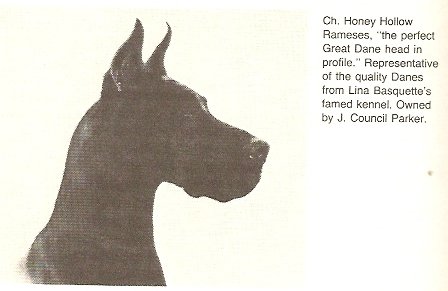 Most of the better blacks of that day sprung from the original Honey Hollow and Jocopa bloodlines. (Jocopa is the kennel prefix of J. Council Parker). Carolyn Mobley of California did a commendable job with blacks from fawn breeding. And despite the GDCA color-code of “honor”, the mixed-color matings go on, sometimes surreptitiously and other times, right out in the open before all the horror-stricken diehards.

Dr. & Mrs. James Childress who owned and adored CH Honey Hollow Great Donner, also owned a charmer, CH Honey Hollow Tall Timber. Too bad that they gave up eventually on breeding or showing Great Danes – like with Stormi’s owner, Cathryn Clarke – they decided that the downright viciousness of some people in the breed were not worth the heartache. It was a great loss to the breed, as Jim was one of the finest veterinarians in the country.

In the words of Stormi’s breeder: “These are rank generalizations, a veritable ‘vice’ that afflicts the human psyche these days. We put people, nationalities, religions, ideologies, races, oldsters and youngsters in a collective narrow box, instead of treating them as individuals which I was taught to believe was the cornerstone of our civilized birthright. There is too much group thinking. Too many organizations taking over our thinking and actions. Perhaps it is colossal conceit, but I always want to be ‘one of a kind’ and not blindly follow the herd.”

“In California when the great black, Othello, came along, I think I gave him his first points. Carolyn Mobley had him. He was one of the best blacks I had seen in my whole life and when I came out of the ring, someone said, ‘How could you put that dog up? He’s out of a brindle.’ I said, ‘Oh.’ I didn’t know that, I’m not supposed to know and it wouldn’t have made any difference. He was the best black I’ve seen in the ring in recent years. He went on to become the top dog in the country for a year and a half or more. He was used extensively. People from all over the country were shipping bitches in. I think he did a lot for the blacks.” “They came out with this breeder’s code of ethics. That’s how it [abhorrence of cross-color breeding] got so strong in this country. There was a group of people that had very strong feelings about this, and they were powerful enough to enforce it.”

(the above was copied verbatim from the waggingtailsdachshunds website which sadly is no longer available. I think it’s a tremendous bit of breed history that needs to be preserved, no less for the valuable lessons it contains). 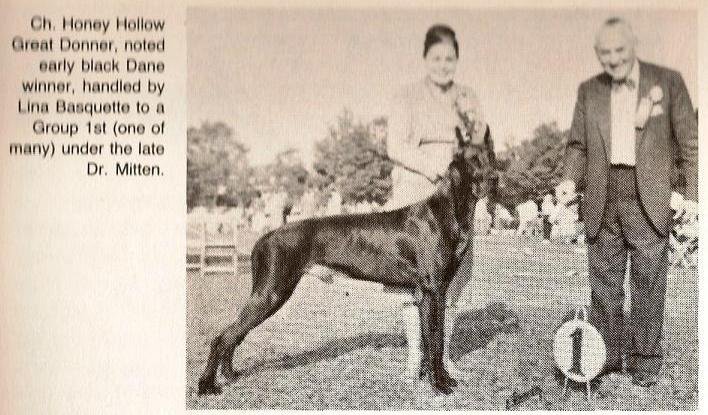 Gone to the Dogs