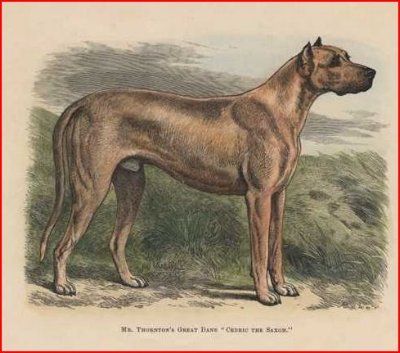 From what we know* about the Great Dane’s history, the Great Danish dog was crossed to the English Mastiff from 1585 and onward. That was before of the introduction of the Pug to Britain a century later (1688) and its mixing with the various mastiffs and bull dogs in the UK and on the continent, that produced extreme brachycephalic bullenbeissers and Bulldogs.
So the original Great Dane was a sighthound x (hunting) English mastiff mix and should not contain any bullenbeisser or pug elements which introduce brachycephalic tendencies. The Pug is a mutated dog – brachycephaly is a mutation that carries with it several anatomical problems which limit functionality and health. It is possible to moderate it via crossbreeding but that’s outside our scope in this Great Dane blog.
The original pre-pug recipes for boarhounds mixed and matched freely and extensively throughout Europe and beyond, giving shape to a dog that the original Great Dane standards describe as neither a mastiff nor a greyhound (verbatim: “The Great Dane should not be a Greyhound nor a Mastiff, but occupy the middle ground between these two extremes”).
In Germany however, when various local & imported landraces & types [Ulmer dogge, Hatzruden, Jagthund, Saupacker, Englische dogge (British mastiff or ‘canis molossus anglicus’), Danische dogge  (Great Dane proper / Grand Danois– store danske hund – i.e.the’blending’ of the old Danish Myndehund (sighthound) & the old English Mastiff)  et al] were all lumped together to produce the Deutsche Dogge breed in the late 19th century, the Pug element entered the Great Dane proper via the Brabant & Danziger bullenbeissers. Further ‘contamination’ by brachycephaly continued and intensified after the great wars, via acceptance in the German studbooks of “foundlings”** (dogs without recorded parentage), because the breeding stock was depleted. Some of these foundlings were undoubtedly boxer crosses, carrying the bullenbeisser (bulldog / pug) legacy.
This goes some way to explain the noticeable type differences between the German Great Danes after WW2 and the British and American populations, as well as populations in other places, that did not cross with bully types to the same extend.
Inbreeding & doubling-up on those lines that carry brachycephaly produces to this day and increasingly so, a more and more ‘molossoid’*** type with the associated problems.

*** (actually a misnomer, but we will deal with that elsewhere)

Brief synopsis & illustrated timeline of the Great Dane from 400 AD to this day, here