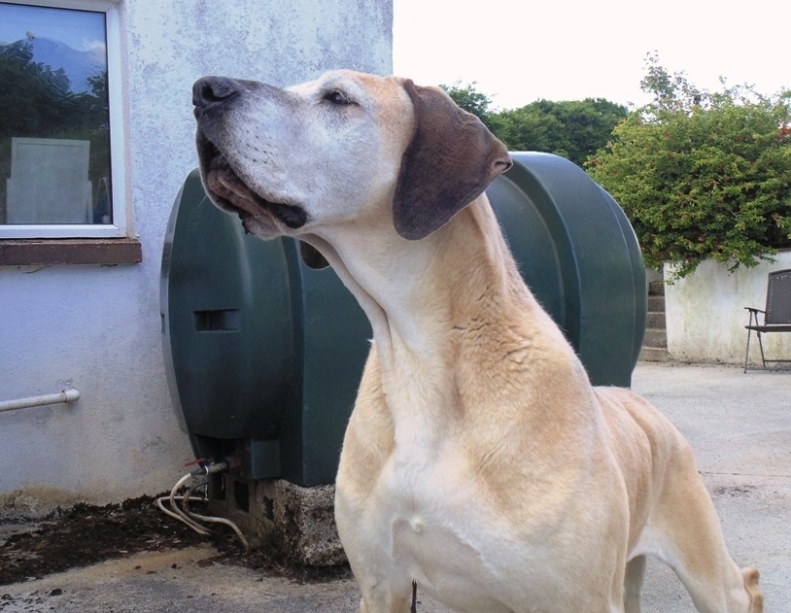 She’s in the yard, but it doesn’t matter. There’s prey out there in the fields by the lake or even yonder. Look at that Concorde nose working. I’m glad I caught that photo.  Pity the background isn’t prettier, to match the dog. She grows lovelier by the moment, my old girl.

The Great Dane is not a scenthound. They don’t amble along, nose to ground. Although they can be very easily trained to track and they make good Search and Rescue dogs, because they have a wonderful sense of smell, they are a very special kind of Hound. They use all their senses. They were never required to specialize on ground scent so they retained all the ancestral hunting skills of the species – they hunt like wolves and use every trick a canine predator uses instinctively by nature. A clever dam will teach her puppies to hunt. No wonder the Dane taught some other hunting breeds a thing or two – Weimaraners and German Pointers, that is. Good all-rounders.

A Dane with a good game sense will first pick up the presence of quarry by air. No, of course not: they’re not specialized bird dogs – although it wouldn’t be untypical for a Dane to ‘point’ momentarily, like a Pointer, or ‘stalk’ crouching like a setter dog. But when they do this, suckling the aerial traces, there’s big game around for certain, you can bet your last penny – or just foxes. (They just love fox poo to roll on: it’s great scent camouflage so that the prey doesn’t smell them first). They will then give voice, to assemble the pack for the hunt – even if there isn’t a pack, only yourself – and take off in the direction of the quarry. If you take your Dane to a forest where there’s game you will notice a transformation. The Hound is unleashed. They go crazy. So be aware.

Lucy’s sense of smell is phenomenal. Doesn’t have to be hairy game, mind you, she can smell a sardine being wafted about in the next county. Very funny as I remember a well-known Dog Encyclopedia that was out many years ago, stating the breed doesn’t have a good sense of smell, and you should be careful when you approach them in the dark. Yes I would surely advise that too, if you’re approaching a Dane household, especially in the dark. Not because they can’t smell you – but because they can – and because you can’t see them, unless they want to. You’re most likely going to get a heart attack when a Dane barks in your earhole suddenly. It’s a blood-curdling, knee-softening, bowel-loosening sound and what’s even more spine-chilling is the glint in the eye, up close and personal enough to feel the hot breath in your face as the cavernous mouth opens in a mischievous smile.

They’re also notorious for letting you in and pouncing or grabbing you from the seat of your trousers you as you’re making your way out; your last thought as you hit the ground “that’s (not) funny I could swear there was no dog around”. I once woke up to the screams of a burglar who had jumped into the yard, cut the glass of the front door and was fiddling with the lock when Milady caught his wrist in the rather instantly persuasive grip of her molars. She hadn’t made a sound. She didn’t break the skin, either, as it wasn’t a predatory frenzy grip. She just waited for me to let her know of my wishes and make sure I didn’t feel threatened; she calmly held him captive until the police arrived; I told him to stop pulling his arm if he didn’t want to cause permanent damage to his wrist. I praised her for being such a good dog. She wasn’t trained to anything of the sort – they don’t need scenario fixations, as it tends to limit their ability to improvise and learn from experience (and that’s why I’m against schutzhund-type training for meaningful watch & protection dogs); if they’re clever, they develop instinctively protective in a safe controlled manner as they mature and are exposed to stimuli. They are very fast learners and good problem-solvers. So, beware. They love surprises.

The typical Dane game-locating stance is that of a gazehound. Might surprise some but since the olden times they were noted for holding their heads high – they don’t have the upright necks of the pure primitive gazehounds that locate moving prey purely by sight in the distance, but for seizing running deer you need to strike up and not down. So they didn’t need the long necks of the western sighthounds that hunt small fast prey on flat plains and need to reach down at full speed to catch it, either. The Dane’s prey were large animals – stags, harts, moose, elk, aurochs, bison, wolves, boars and even bears occasionally (or some unfortunate fox). That’s why they have strong necks and strong jaws, the length of the neck equals their head length, and has a good arch at the nape – that’s power, from great big atlas & axis vertebrae – but they’re not giraffes. They are made to run, run, run, and wear the quarry down. Endurance gallopers, they are – neither sprinters nor trotting specialists; hence, their body proportions are square.

Unlike what some folks might want to tell you, to justify breeding Hippo-types, the Great Dane was not a catch dog, like the smaller bullenbeissers, the heavier mastiffs and the bull-dogs that went to work after the fast dogs ran down the prey. They were coursing hounds. When the par force hunt died out together with the feudal era, the Danes were crossed with English Mastiffs, to create an all-round boar and stag hound. A dog to find, chase and wrestle the prey to the ground. It almost went full circle since the ancient times. And this is our modern Great Dane.

How do you know you have a Dane?

And then the dog takes off, just a couple huge powerful leaps to reach full speed. Like watching a hunting lioness, you can feel the ground shaking, hear the pounding of every stride.

That’s one way to know, for sure, that your dog is a GREAT Dane.

10 thoughts on “milking the air”